The June Oven and the Brava Oven are both smart countertop stoves that promise to change your life. Do they keep this promise? I have considered the pros and cons of both ovens to answer this question.

The June Oven and the Brava Oven can both cook foods using different cooking methods. However, Brava has a better app. The Brava heating technology is advanced, cooking food types at the same time better. But the June Oven costs less. And there are other differences!

In this blog post, I compare the June Oven and the Brava Oven. I consider price, cooking technology, functionality, apps, size, and a few other features. Are you considering buying a smart countertop oven? Keep reading to make the right choice for you and your family.

Why Should I Buy A Smart Countertop Oven?

Smart ovens have saved programs for many different types of food. This means you don’t need to Google how long or at what temperature to cook your food. You can select a program for the food you want to cook and the oven does the work for you. Smart ovens can also be controlled remotely.

You can also connect a smart oven to an app. The app lets you control the oven from another room, or even from outside your home. A smart oven can also be connected to your home assistant, like Google Alexa. You can tell use a voice command to tell the oven to turn on to pre-heat, for example. 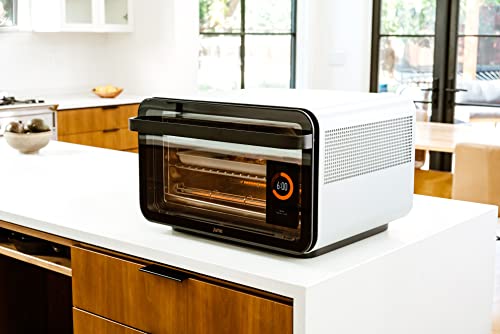 Click on the image above to see detailed info on Amazon.

How Do The June Oven And The Brava Oven Cook Food?

The June Oven cooks food like a traditional convection oven. It has carbon-fiber elements to produce heat. Convection fans distribute the heat throughout the oven. The Brava oven cooks food by using light energy. There are six light bulbs in the oven. Individual bulbs can be set to different intensities.

This makes the Brava so good at cooking different foods at the same time. You can cook a steak, potatoes and green beans all at the same time. The oven will add more light intensity to the potatoes than the steak, for example. This lets them both cook correctly, without you having to keep checking your food.

In terms of cooking technology, the Brava is superior to the June Oven. Even though the June Oven can cook different foods at the same time, it is impossible to do it as accurately as the Brava.

The Brava technology also eliminates the need for pre-heating your oven. The light can achieve 90% in two seconds, which is much faster than in a convection oven.

The Brava can also cool down quickly. In 15 seconds, it is back to room temperature. This is great for cooking foods right after each other.

We wrote a detailed article about the 13 Best Kitchen Appliances. It is very helpful. Go check it out!

How Can The June Oven And The Brava Oven Control Food Temperature?

Both the June Oven and the Brava Oven come with temperature probes. When cooking protein, for example, the probe is inserted into the food. While cooking, the temperature is monitored and food cooking time may be adjusted.

The Brava probe also has markings on it. These can be used to measure the height of your protein, like a steak or a piece of salmon. This helps the oven calculate how long the meat needs to be cooked for.

Users have reported that the probes are quite difficult to use. Inserting them into the small oven is quite tricky. The Brava was updated to be able to be used without the TempSensor.

Which Is Larger, The June Oven Or The Brava Oven?

The June Oven has a cubic foot of cooking space inside. The Brava oven has a smaller interior cooking chamber space of 0.6-cubic feet. If you are cooking for more people, the June Oven will be a better option. However, you may need to consider the height of the oven as well.

The Brava oven is 11.3” high, while the June Oven is 12.75” high. Both ovens require at least 4 inches above them to be open. This ensures that there is proper ventilation. If you have kitchen cabinets hanging above your countertop, the Brava oven might fit into your kitchen better.

Both ovens are larger than many other kitchen appliances. The Brava oven is 17.3” long and 16.4 inches wide. The June Oven is 19.6” wide and 19” deep. Keep this in mind before making a purchase, especially if you have limited countertop space.

They are also both quite heavy. The Brava oven weighs 34.3lb. The June oven weighs 39lb. This means that you don’t want to lift them regularly. You shouldn’t expect to keep your oven in a cupboard and take it out only to cook.

The Brava allows 2-tray cooking to cook more food at once. But if you have a large family, you may not be able to cook your whole meal in the Brava (or the June Oven for that matter). You might cook your main course in the Brava and use your traditional stovetop for sides.

Which Is Cheaper, The June Oven Or The Brava Oven?

The June Oven costs less than the Brava Oven. But if you want to make use of all the functions of the oven, like the air fryer function, the $599 June Oven won’t be sufficient. You will have to buy a Premium package, which costs $999. The Brava Starter Set costs $1295.

You can upgrade to a package with more accessories with the Brava Oven as well.

Note that all June Oven packages and all Brava oven packages have the same oven. The cheaper packages just have fewer accessories.

You also have to pay a subscription to access all the recipes on the June app. For some packages, using the app is free for the first year. The Brava app is free to use.

Which Is Better, The Brava App Or The June App?

The June app is the number one reason not to purchase a June Oven. Users have complained of poor connectivity. Cooking instructions are often misleading or incorrect. And the Android version is especially terrible. Development seems to focus on iOS updates. The Brava app is much more user-friendly.

June app users have also complained that there are not enough cooking programs on the app. The category-based menu makes it difficult to find specific programs. And often the cooking times in the program were too short, leaving food undercooked. When increasing the cooking time, one can only do so in 3- or 5-minute increments. This causes a lot of frustration, something a smart device should reduce, not increase.

There have been some complaints that the Brava app often asks you to log in again. There were also some issues with the search function in a 2021 update. They might have improved on this by now. Users also reported that the app did not work as well on an iPad.

The Brava app is updated every Tuesday, which includes adding new menu items.

If you want to purchase a smart oven specifically for its smart functions, stick to Brava.

Which Oven Has More Functions, The June Oven Or The Brava Oven?

The June Oven is advertised as being able to replace 12 kitchen appliances. It can be used as:

The Brava oven can perform all the cooking functions that the June oven can. The functions may just be called something slightly different on the user interface. And you can make use of all the functions if you buy even the most basic Brava package.

The Brava makes use of the Maillard reaction to create caramelization on food. Food becomes nice and crispy without burning.

Even though the June Oven can technically cook eggs, it doesn’t do it very well. The Brava Oven has much better technology for cooking eggs. Note that the egg tray is not included in the Starter Set.

Other Differences Between The June Oven And The Brava Oven

Pros of the June Oven and the Brava Oven:

If your budget allows it, I would suggest buying a Brava oven rather than a June oven. The fact that the June app is so poorly rated is enough for me to avoid the brand. If you want to make your home smarter, you don’t want to struggle with apps, it’s as simple as that.

If you are only interested in a countertop oven to use manually, the June oven might be a sufficient choice for you. But in this case, you may as well buy a “dumb” oven and save yourself the money.

HomeStreamliner.com is a participant in the Amazon Services LLC Associates Program, an affiliate advertising program designed to provide a means for sites to earn advertising fees by advertising and linking to Amazon.com.

Can I Control Multiple Strip Lights With Only One Remote?13 Best Smart Kitchen Appliances on the MarketHow to Choose the Right Smart Hub for YouHow to Make Your Home Office More Inviting